This trip to the mountains of Jotunheimen – “the Home of the Giants” – has definitely been a magical one for my sister and for me. It has been a journey through outer and inner landscapes on so many levels, both personal and collective, and it has been powerful and transformational in ways that are hard to describe, but two nights ago I got this message “Now there will only be WE”. To me, this signifies that we as a collective have shifted away from the old ego based, fear based timeline, but we are still very much in transition into the new so the journey is not over yet ;-).

There have been so many synchronicities and so many wonderful messages from Mother Earth in the form of unusual encounters with wild animals and birds, and I do not think I have ever felt so small and at the same time so connected to something so immense as I have during these last two weeks. Everything around me is vibrating with life, even the rocks feel alive! We still have a few days left of our stay, but I wanted to give you all an update on what has happened this last week, for you have all been very much a part of it.

As you perhaps remember, during our first couple of days here we completed the first part of the work we had been told we were supposed to do while we were here. It was about “connecting the waters” by carrying some of it from a small spring and bring it to Lake Gjende, and I posted a short summary of it and two photos in “Welcome to the July Gathering around the Pond”. The CCs told us beforehand that we would be asked to do more work like this while we were here, but that it would be in a different location. It was no surprise that this also involved working with water, as water has been the main focus all through this trip, and it was all about “exchanging information in all sorts of ways beyond words”.

Earlier this week, my sister and I were guided to visit a local silversmith. There, I found a ring that was inspired by the mountains around Lake Bygdin, a huge lake situated between lake Gjende and the place we are staying. It also had three small golden quartz incorporated into the design, and the silversmith told us that these were actually from Lake Bygdin. The energy in that ring was so powerful and I knew that not only did I have to buy that ring, it also confirmed that Lake Bygdin was the last of the local “power nodes” we were supposed to work with. The silversmith had shown us how the quartz looked like before it was polished, and he told us we could find them in the sand along the shore of Lake Bygdin. We went there the next day, and we found a few pieces that we brought with us.

Two days ago, we were guided to go back to the river we had visited earlier. It is a powerful one, flowing down a steep mountainside to join the waters flowing out from Lake Gjende, and it has the most amazing energy. We did two ceremonies there, and in both places I connected to the collective energy of this Pond and “added” that to this “river of light” so that our combined energies would have an even larger impact on this world, helping to cleanse away everything that does not belong in the New World. At the last place, my sister and I released the largest piece of golden quartz from Lake Bygdin into the torrent together while we said a blessing. It was a powerful moment, but we also knew that it was not the completion of our work here.

That came yesterday, for then we both knew it was time to do a ceremony on a mountainside overlooking Lake Bygdin. We had hiked up there for the first time last week, and the view there is magnificent. On the horizon, two huge mountain peaks stand out, creating what looks like a portal, and the first time I saw them a felt a huge surge of energy through me so I knew that this was an important place. As we hiked up the mountain, we saw a female grouse right in front of us, and the way she behaved, we knew she was guarding her chicks. She just stood there, perfectly still looking at us to draw our attention while her one little chick scurried into hiding. She continued to stand still and on guard as we moved away. It was such a wonderful thing to see, and it was such a powerful message of love and protection from Mother – for today and for the future for us all :-).

We found the spot to do our ceremony, it was “guarded” by what looked like a magical wand made by an old and weathered tree root, so we sat down and prepared ourselves. I once again connected to the collective energy of the Pond before I recited a prayer to open up this immense portal in the mountains, turning to all of the four cardinal points and to Mother Earth and the sky. When I read out the part of the prayer addressed to Father Sun and Grandmother Moon, my sister suddenly saw the pale half moon in the sky, directly above the mountain making up the left side of the “portal” at the other end of the lake. It was such an amazing confirmation, and we both knew that when the moon had passed over the other mountain we would be finished with our ceremony, and that is exactly what happened. I used my singing bowl while reciting an incantation, saying that the sound was the signal that the light could no longer be barred from anywhere on this planet, it will flow freely forevermore, making this world a world of light and a world of peace for eternity. Then, I struck the bowl once and gave it to my sister so she could do the same, and then I struck the bowl one final time while she held it. When we had finished, the moon was directly over the mountain making up the right side of the portal, and then, it disappeared behind the clouds.

We hiked all the way to the top of the mountain, and as we stood there marveling at the view, my sister looked up. Above us, two huge eagles were circling slowly around each other and around the Sun. After we had watched them for a minute or so, they slowly drifted away in opposite directions, one to the east and one to the west, towards the portal. When we had hiked halfway down on the other side, we stopped for a little rest near a huge rock. Suddenly, a huge blue dragonfly appeared, flying between us and around us and then it landed on the rock we stood next to. We finished the hike down at the beach at Lake Bygdin and there we were given the gift of finding a large piece of golden quartz in the sand, a wonderful way to end a magical day!

My sister and I both have a sense of completion now, at least when it comes to the “collective events” that we were brought here to do, but like so many of you can testify to, there is definitely not a sense of completion when it comes to the flow of energy. This journey to the mountains may be coming to a close, but our collective journey is picking up even more speed. Thank you all for being our “fellow travelers”, it makes this adventure so much more enjoyable, amazing and inspiring in every way! I am really looking forward to what we will be manifesting together in the time ahead 🙂

With love, light and gratitude from my sister and from me, Aisha ❤ ❤ 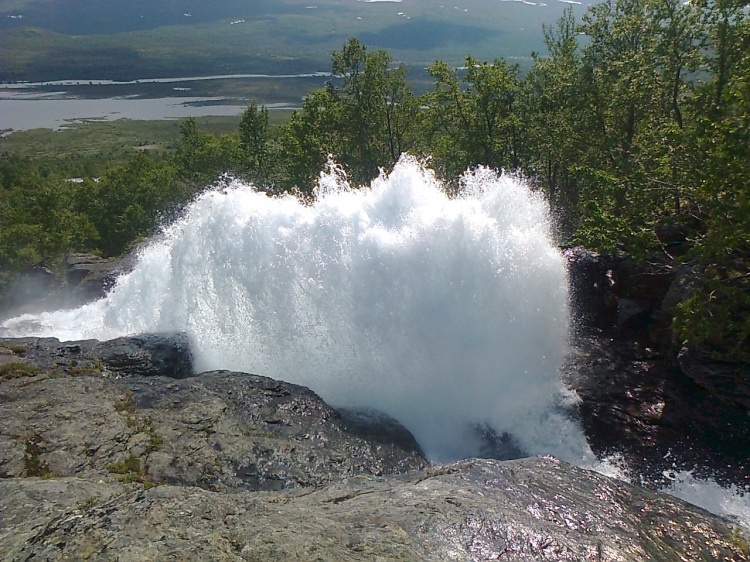 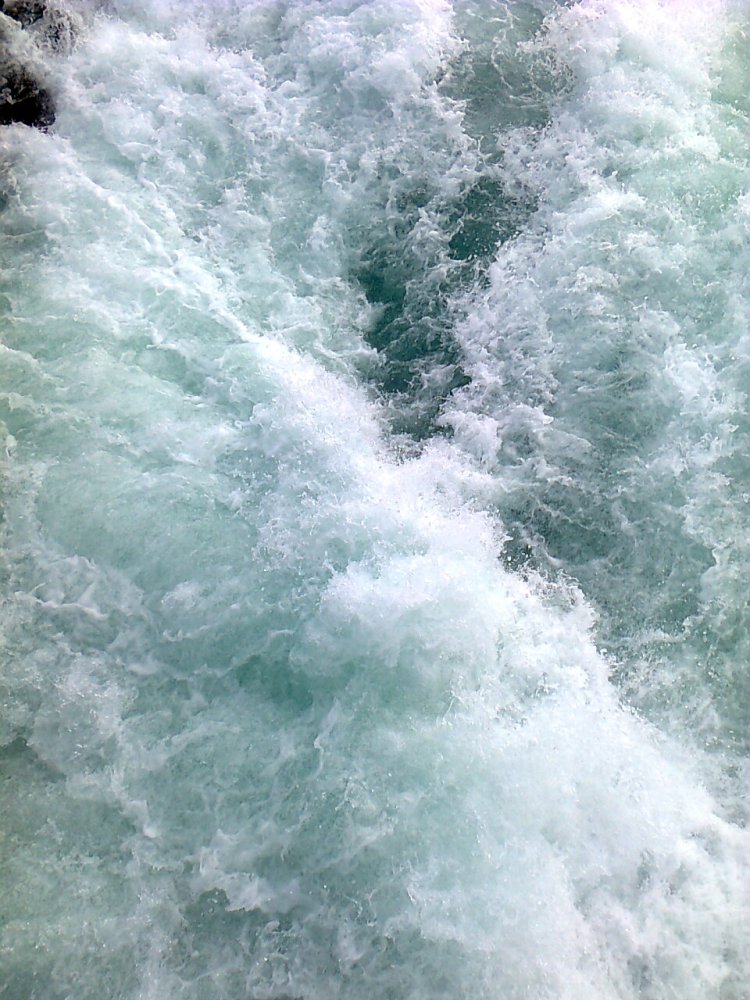 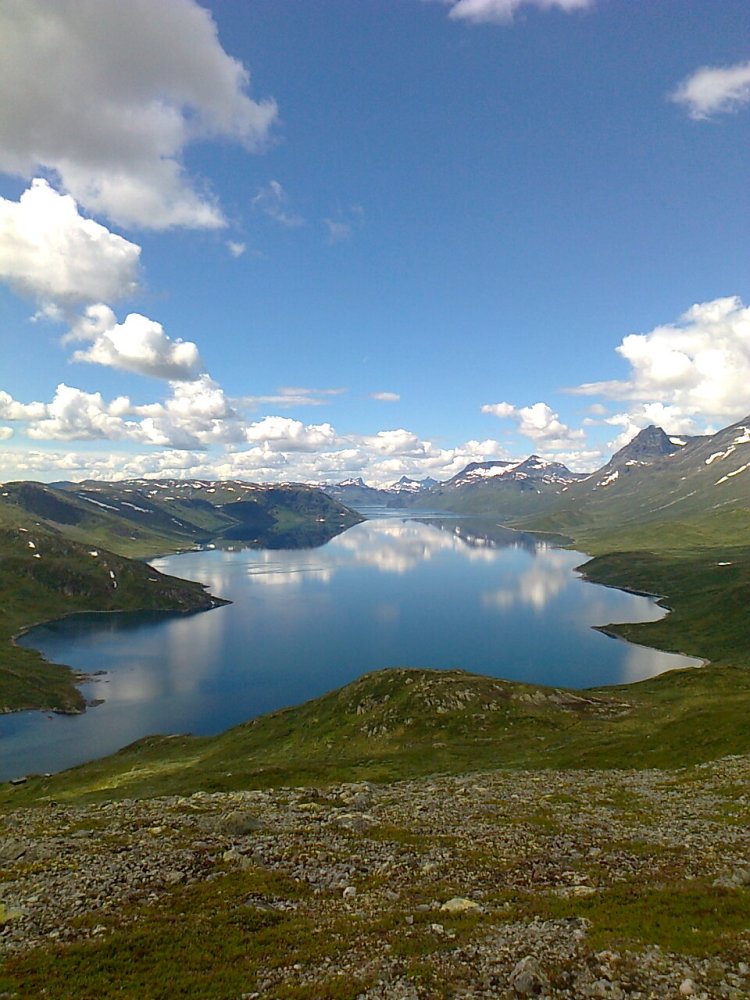 If you look closely at this picture, you can see the faint half moon above and to the left of the small cloud in the center.

343 thoughts on “A short update from me”